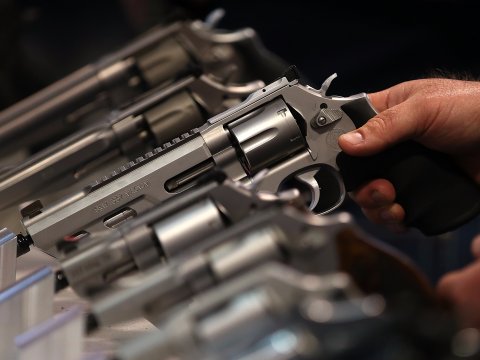 Many people jump up and down whenever the topic of guns, gun violence, or gun control is brought up. Personally, I have to believe that our Founding Father’s believe that a well armed population is the best counter balance to a corrupt government. For as Thomas Jefferson once stated, “When the people fear their government, there is tyranny; when the government fears the people, there is liberty.” In actuality, when people think of the causes of the American War for Independence, they think of slogans like “no taxation without representation” or a cause célèbre like the Boston Tea Party. In reality, what finally forced the colonials into a shooting war with the British Army in April 1775 was not taxes or even warrant-less searches of homes and their occupation by soldiers, but one of many attempts by the British to disarm Americans as part of an overall gun control program, which included seizure of firearms and powered. So, for this very reason it is understandable why the Founding Fathers made the 2nd Amendment, the second most important in our Constitution. But aside from that, we have to take the emotion out of the discussion of guns and actually look at facts, and being an engineer, I like dissecting numbers and statistics, so this is what this article will do, bit by bit.

OK, here are the fact: There are 30,000 gun related deaths per year by firearms. That is not disputed as a fact of American life, sadly.

What is never shown or talked about though, is a breakdown of those deaths to put them in perspective; as compared to other causes of death.

• 65% of those deaths are by suicide which would never be prevented by gun laws
• 15% are by law enforcement in the line of duty and justified
• 17% are through criminal activity, gang and drug related or mentally ill persons
• 3% are accidental discharge deaths

So technically, "gun violence" is not 30,000 annually but drops to 5,100. Still too many!! So let’s see how are those deaths spanned across the nation?

So basically, 25% of all gun crime happens in just 4 cities. All 4 of those cities have strict gun laws so it is not the lack of the rule of law that is the root cause. Maybe it is gang violence and the lack of the historic family unit with a father and a mother, or poor schools, or lack of job opportunities? Whatever the root cause, we are left with 3,825 deaths caused by guns in the rest of the Nation, or about 75 deaths per State.

Now, which State has the strictest gun laws by far? California of course but understand, it is not the tool (guns) driving this. It is a crime rate spawned by the number of criminal persons residing in those cities and States.

So if all cities and states are not created equal, then there must be something other than the tool causing the gun deaths.

Are 5,100 deaths per year horrific? Absolutely, but how do they compare with other known causes of death?

Now let us look at the really big numbers of deaths caused by preventable actions:

• 200,000+ people die each year (and growing) from preventable medical malpractice. So in actuality, you are safer statistically in Chicago than with dealing with a doctor!
• 710,000 people die per year from heart disease. Time to stop the cheeseburgers!

So what is the point of stating these statistical facts? It is simple. If the people who focus their attention on banning guns were to instead focus on heart disease, even a 10% decrease would save twice as many lives annually over of all gun related deaths (including suicide, law enforcement, etc.). In addition, a 10% reduction in malpractice from doctors would be 66% (20,000 lives) of the total gun deaths or 4 times the number of criminal homicides. It seems relatively easy to achieve a 10% reduction in these two preventable causes of deaths, so where is the outcry?

So you have to ask yourself, in the grand scheme of things, why is there such a focus on guns? Our Founding Fathers realized that freedom is a messy and risky endeavor. They also understood Government that governs least, governs best. Many aspects of life in a free society can lead to harm or misfortune or death for some people. Driving kills. Smoking kills. Bad diet kills. Drugs Kill. Sports and recreation kill. Travel kills. Living kills. Bottom line, living is a risk filled business.

The core element of any objective to “eliminate” ALL such bad outcomes is to increase control over many, most and eventually all aspects of life. Of course, this does not mean that measures should not be taken, largely in education, to make activities and elements of life pragmatically safe. Look at the wonderful success of the anti-smoking campaign that removed millions of people from even ever starting. But "common sense" approaches cannot be equated to the perspective of those who only seek to eliminate freedoms that are (1) widely accepted by large portions of the or (2) established as points of law.

It is pretty simple. Taking away freedoms under the excuse of taking care of people gives control to governments, which leads directly to tyranny. This is not conspiracy theory; this is a historical fact. Why have we not understood this for so long? Tell me again why is it impossible for any Government not to spill over into dictatorship? The Founders of this great Nation knew that regardless of the form of government, those in power may become corrupt and seek to rule as the British did. As Lord Acton said, “Power corrupts; absolute power corrupts absolutely.”

They colonial British tried to disarm the populace of the colonies because it is not difficult to understand; a disarmed populace is a controlled populace. Thus, the Second Amendment was proudly and boldly included in the Constitution, representing and protecting all the other freedoms. It must be preserved at all costs not because it is sacred, but because it is statistically sane. Again, our Forefathers, while not perfect, were incredibly prescient.