When Wars were About Ransom

April 02, 2014
This is an interesting development about how what was old is now new again...

Let me see if I have this right...

Ukraine buys almost all its energy (natural gas) from Russia.  Revenues from natural gas are a primary source of Russia's income.

Because of the recent disagreement between Ukraine and Russia, Russia is raising the price of natural gas it sells to Ukraine.

Ukraine is almost broke and cannot afford the increase in the natural gas price because it would be forced into bankruptcy.

President Obama just announced the United States is giving Ukraine $1 billion to assist in paying for the higher priced natural gas it buys from Russia.

So, the United States is actually giving Russia $1 billion because in reality, the money is just passing through Ukraine.

The first question: Has Putin figured out a way to raise the price of his natural gas sales and make the U.S. pay for the increase?

Next question: Was he really in the KGB or was he a actually a former commodities trader? 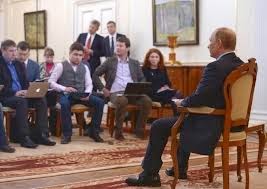 If this analysis is accurate, Putin just got Obama to pay him $1 billion by holding a press conference and trucking some troops across town from the Russian Navy base in Ukraine. In the days of yore, kings were never killed, but held as ransom to extort money... Well done Putin!