I'd Rather Be a Pirate

April 10, 2014
Recently, I have had to make some presentations about what it takes to be an entrepreneur or start up a company, and what type of people I would hire or be associated with.  When asked, I usually come back with this question:  If you had a choice to sail the seven seas either with the Royal Navy or as a Pirate/Privateer, what would you choose? 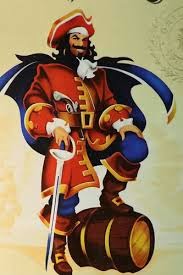 Incredibly, the answer to this simple question is really at the crux if you can be an entrepreneur or not.  One choice offers the prestige and power of a great power, and known and respected entity, at the price of having to conform to a certain system of rules and regulations based mostly on seniority and position not necessarily performance and merit.  The other offers a high risk lifestyle, but with some freedoms and the ability to join a group of liked minded individuals.  To sail to unchartered, risky lands; to fight for what you believe in, and to seize opportunities wherever you go. How you answer this question is the basis if you will be entrepreneur or not.

If you did not choose being a pirate, does not mean you will not be a success in your own right, it just means that you prefer a more ordered and predictable path to that destination.  Risk and the ability to go to the unknown is not in your character.  Yes, you might have great success in your endeavors, but the likelihood of being wildly successful is slim. As I like to say, you never find riches on a well trodden path.

On the other hand, choosing to be a pirate actually almost guarantees you will fail! You say what?  I thought being a pirate is what it is all about, and now you say being one almost assuredly means we will fail? Well, you have to decide if that failure, or series of failures, stops you from going forward, or if you choose to go forward, for a pirate sees failure, loss and defeat as just mile markers on the road to success.  If the goal (booty) is worth more than the fear of failure?  A pirate realizes Paulo Coelho’s saying of “There is only one thing that makes a dream impossible to achieve: the fear of failure.”

It is precisely the ability to go beyond that fear, into unknown waters that having a pirate-like mentality is so important.  While being able to do what Churchill says, "When you are going through hell, keep going." is so vitally important.  Having a pirate mind means you just cannot give up…on the goal.

Secondly, having a pirate mind also means you choose those people you associate with, and quickly realize that the number is not so important as the quality of the individuals.  As I say, “I find my chances for success improve when I associate with a few talented people as opposed to a plethora of mediocre ones.”  And this is true in ANY startup.  Pick good, liked-mined people that help you achieve your goals, and most importantly, want to be pirates.

Lastly, having a pirate like mind means that you have the flexibility and resilience to keep going towards you goal no matter what.  It is NOT about being viscous or uncouth, but in living by a code of honor that few on the outside can ever understand. So as Steve Jobs once quipped, “It’s more fun to be a pirate than to join the navy.”

Nick said…
I guess I've grown weary of these types of questions that attempt to sum your ambitions and skills with one answer..... you make good points. But when you asked pirate or royal navy, the connotation of pirate to me is that of those that steal and take from others without 'earning it', who live a sort of day to day existence focussed on maximizing self satisfaction. when I look back at Pirate history (at least what little I know about it), I don't think of a lot of great achievements that moved mankind forward. I do think of those thing when I think of the Royal Navy. And yes, they did some not so good stuff to - empiricism and empire building. But I get the just of your question, I just think it is too simple a way to figure out if someone is one thing or another. Just my two cents....
April 11, 2014 at 1:25 PM

windowpane said…
This comment has been removed by a blog administrator.
April 11, 2014 at 2:31 PM

Profit Prophet said…
Nick, it is interesting as believe it or not, the pirate code of democracy predates our own by over 100 years. Plus three of the most famous pirates / privateers Henry Morgan, Sir Francis Drake, and John Paul Jones were instrumental in helping their countries defeat a much larger foreign navy. But I am not hear to sing the praises of pirates, but the pirate mind...as to paraphrase Mae West, history has never been made by a well behaved person.
April 11, 2014 at 3:51 PM

SBL said…
Wow Jeff this is some seriously good writing!

I accidentally found this blog while searching for more info on that cnbc tv show "The Profit", but found something else called the Profit Prophet, a website written by two ladies (which appears to be abandoned now), and when searching for their "book", I found your facebook page linked to some of your blog posts., and I'm here now...

I'd much rather be a pirate!

BTW, noticing what Nick said, we often profit on leveraging the misconceptions of others, morale or imorale. I have become a cynic after 12 years as a self-employed tech contractor, but I realize it has actually helped me see the world in a way which allows me to make more money, rather than being all pollyannish about the wonderful world and it's possibilities, yada yada.
April 16, 2014 at 6:36 AM

Anonymous said…
I didn't really like the drama of the tv show, but I could ignore most of it & focus on the lessons. I wanted to learn more lessons so I searched it out. But I found this instead. I await more lessons!
April 16, 2014 at 10:18 PM