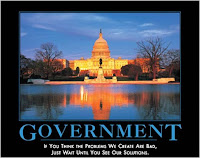 Insanity has many meanings but the one I like is about doing the same thing over and over again while expecting different results!

The perfect example of this would be giving the government, any government, the authority to run some enterprise, any enterprise, and expecting it to be run well, efficiently, within budget and to produce a work product half as good as a company in the private sector could.

It has never happened, it's not happening now and to expect it happen at any point in the future can be summed up in one word, Insanity! Now on to the short story:

Once upon a time the government had a vast scrap yard in the middle of a desert.

Congress said, "Someone may steal from it at night.”

So they created a night watchman position and hired a person for the job.

Then Congress said, "How does the watchman do his job without instruction?”

So they created a planning department and hired two people, one person to write the instructions, and one person to do time studies.

Then Congress said, "How will we know the night watchman is doing the tasks correctly?”

So they created a Quality Control department and hired two people. One was to do the studies and one was to write the reports.

Then Congress said, "How are these people going to get paid?”

So they created two positions: a time keeper and a payroll officer then hired two people.

Then Congress said, "Who will be accountable for all of these people?

Then Congress said, "We have had this command in operation for one year and we are $918,000 over budget, we must cut back.”
So they laid-off the night watchman.

NOW slowly, let it sink in.