One Nation Under Surveillance?

July 17, 2013
Just 15 years ago most of us were still getting most of our mail delivered by the USPS postman. Now it has become very rare even in the case of most bills.


I have often wondered, if the equivalent of today’s mass surveillance had been going on 20 or even just 10 years ago… and people would find ALL their PERSONAL cards and letters had been copied, opened, read and stored by their “Protective government,” would they have responded with the same stoicism and indifference that seems to permeate today’s sheeple?


I think here would have been a MIGHTY uproar! Yet because its “Digital” it doesn’t seem to register…GO FIGURE?


Who wouldn’t be upset if they found strangers had been going to their personal stuff, searched through their file cabinets and drawers, read ALL their PRIVATE records and looked through their very personal (those not placed on Face Book) photo albums? Or would it be ok if people knew it had happened but the burglars left no traces and placed everything back where it originally was?


It wouldn’t be! But the very same thing is happening today! (NSA, IRS, DHS, and the acronyms go on and on and on….”


WELCOME TO ONE NATION UNDER SURVEILLANCE! 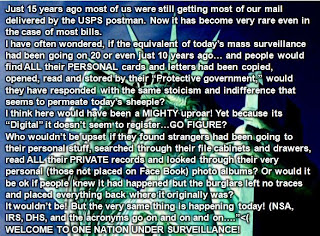