Traits of an Entrepreneur

January 11, 2015
I will begin and end this article with two quotations. The first is from Edward Rogers:

"You don't deserve to be called an entrepreneur unless you've mortgaged your house to the business."
--Edward S. (Ted) Rogers 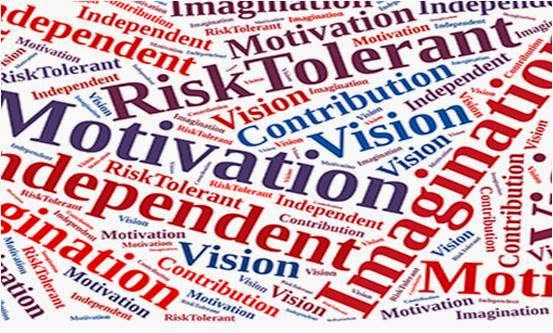 This one sentence pretty much says it all. Entrepreneurs are not necessary gamblers, but they are willing to put everything they own, or go all in, in order to make it happen. In the classical sense an entrepreneur is define as anyone who has possession of a new enterprise, endeavor, venture or idea, and assumes significant accountability for the inherent risks associated with the development, growth, and outcome. He or she is an organizer who combines land, labor, material resources, and/or capital to create and market new goods, products, or services. The term "entrepreneur" is loaned from the French and was first defined by the Irish economist Richard Cantillon, where the term was applied to the type of persona who was willing to take upon themselves a new venture or enterprise and accepts full responsibility for the outcome.

In addition, if you are starting a business that involves just doing something that someone else has already done does NOT make you an entrepreneur. Case in point, franchisees Lawyers, Doctors, etc. Sorry, it does make you a businessman or woman, but not an entrepreneur. Entrepreneurship, by its very nature, implies and demands that you are creating something that has not been done before.

A former Senator from South Carolina, Jesse Helms, once quipped about pornography, "I cannot tell you what pornography is, but I will recognize it when I see it." So too in a great way, is this true for entrepreneurship. Many people consider themselves entrepreneurs, when in fact, they are just business people, or worse yet, employees. I am not saying that these individuals cannot possess the characteristics of an entrepreneur. They can. They are just not entrepreneurs.

Not having these characteristics does not mean you will not be successful (wow, three negatives in one sentence), it just means you might have to surround yourself with someone who does have them (this gets into another topic of team building, which I will not go into here).

While these characteristics help an entrepreneur when they have to wear the multiple hats of salesman, leader, confessor, cheerleader, foreman, scientist, accountant, and artist; two other characteristics of entrepreneurs that should be included are the ability to endure failure (resilient) and the ability to go the first mile alone (fearless). There is a big difference from being able to endure criticism and failure. No, failure is something entirely different. Incredibly, most successful entrepreneurs failed a lot, in a large part because they were trying something that was never attempted or done before. The successful entrepreneurs learn from their mistakes, take those lessons, adapt, and then try again with something new and difference. Failure is just a mile marker on their way to success.

While in some way, each of the characteristics can be honed through practice, training, and experience, there is one that cannot, but almost without fail, every successful entrepreneur says that needed in order to be make whatever they were doing a reality. It is a intangible characteristic of an entrepreneur but it is one that actually entrepreneurs believe they possess and that is the ability to be lucky. Yep, luck, just being at the right place at the right time, coincidentally running into someone you needed to meet, or just getting noticed by someone important, is probably the biggest factor in being an entrepreneur which cannot actually be controlled but is vitally important. Some studies have been conducted that actually say that some forms of luck can be "helped" to happen, and as a rule, successful entrepreneurs overwhelming believe they are lucky.

So, there it is. Entrepreneurship is an experience to be learned, and helped along if you have a certain set of characteristics, and is really dependent on luck. Still interested? Maybe this quotation can help sum it up:

"Entrepreneurship does not build character; it reveals character."
--Jeffrey Fry

Unknown said…
Thank you for sharing this on Facebook. I enjoy seeing characteristics entrepreneurs posess and matching them against my own traits. And I certainly agree that you have to surround yourself with others who have the skills and strengths you may lack.
February 28, 2011 at 3:28 PM

Profit Prophet said…
Donna, thank you so much for your kind words...I love entrepreneurs...real ones, not wantrepreneurs...It is great you possess so many of these characteristics...now go and set the world ON FIRE!
February 28, 2011 at 4:25 PM

stacie28 said…
interesting article! Famous entrepreneurs like Yuri Mintskovsky or Richard Branson also possess these traits mentioned above. You surely need these characteristics in order to be a successful entrepreneur nowadays. Those two quotations are very inspirational!
February 16, 2012 at 7:50 AM

Unknown said…
Most people have only a few of the traits listed. Success consists of rocognizing your needs and fnding the best people to execute them .A simple example , my staff asked me to do a brief video . After 10 tries we all gave up and used outside resources to develop a greaT , script , voiceover and images for less than a few hundred dollars .
BertShlensky, President ,Startupconnection
April 7, 2014 at 11:49 AM